Listen to the wilds cry

An intimate look at a big forest ravaged by tiny beetles 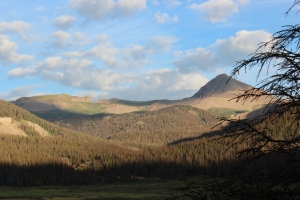 If anyone had told me ten years ago that the hills as far as I can see and beyond would be filled with such death, that I’d be surrounded by miles and miles of mountain hillsides draped with dying trees, up to the top of tree line on both sides of the Divide… I would never have believed.

I believe now.  For this is what I see.

We try to be optimistic.  See the few green trees remaining.  Some smaller Spruce, and of course, the Aspen.  Glimmers of hope.

It’s not enough.  Look at the rest.  It’s dead. Dead, damn it, dead!  We are living surrounded by death.

I try to find the beauty in it all, and if the light is just right, it’s there, you can see the softness in the setting sun on the dying needles.  A more open view when you’re in the woods.  But really, that’s it.  It’s dead, death, and lots of it. It gets to you some times.

Genocide of the mountain and we sit back and say there is nothing we can do.  Rape of the land I love.

It’s not that bad, you say.  There’s still so much beauty, so much goodness, so much life.  Oh, I know.  I see it every day.  I do my best to appreciate.  Wildflowers, grasses seeding out, steel grey clouds, trout surfacing the river, captivating colors in the rocks, a rainbow, a sunset, the flash of the blue bird on the old cedar post.  But there is also so much death.  And dark clouds do get gloomy, intriguing as they may at first appear.

Cheer up, you say, it’s still so beautiful and always will be.  Oh, I promise you, I know and I see, very clear and very deep.  For I am here, remaining when your fairy tell ends.  This is our home, our reality.  So how can I turn a blind eye to this devastation?

I saw a stand of smaller trees, two, three, four inches in diameter, standing dead with tell tale signs of beetle kill.  Dripping sap turned hard, pin holds and chipping bark, needles falling off like rain, teardrops of the wilds as I ride by horseback and brush too close to death.  I tip my rim forward and let the needles fall onto my horse’s mane and neck.  He is used to this.

This was not supposed to happen.  None of this was.  I remember the first such ravaged land I saw, devastated by the beetles, back fifteen years ago or so in Carson, New Mexico.  Didn’t know what it was back then, as we watched the four and five hundred year old pinon trees that were here when the Spanish settled, wither away in one season.

I’ve heard all the “expert” opinions, and know it’s just a guessing game.  It will only get the pinon, or perhaps the ponderosa, scotch, limber, lodge pole, fir, bristlecone, spruce…  It will only kill up to eight thousand, then nine thousand, ten thousand feet…

Last year they even told us once it’s dead it might not burn as bad.  Colorado learned the hard way this year.  I don’t want to call it all “lies.”  The intentions of the so-called know-it-alls might be good.

Face it.  No one knows.  I’m tired of hearing predictions that don’t pan out and ideas to fix the forest or save one single tree that just won’t work when the entire view – yes, miles and miles and miles, how many millions of trees – die before me.

Death.  That’s the problem.  It’s not that it is ugly per se, though most of us who live in it still have a heck of time finding true beauty in the rolling red hillsides or one individual, unique dead standing tree, just one more in a forest of so many.  The problem is that the hills and mountains that once sang with life and promise now stand silent, stripped and exposed like a bleeding heart.  Our trees have been raped and killed.  And not just one or two or a hundred or so.  But mile after mile, mountain after mountain, millions and millions and millions of trees.

Dead.  Don’t tell me it’s a natural cycle and it’s all going to be OK.  I’ve heard enough of that.  You’ve proven you have no idea what you’re talking about, what is happening. But it’s happening.  It’s happened. These trees are dead.  These mountains are dying.  It’s death and it’s ugly and it’s real. So stop sugar coating the view before me because I take off the green tinted glasses and I see red and brown and grey.

I’m tired of lies.  Of guesses.  Of ignorance for which I am guilty too.  I’m tired of listening for what I want to hear, taking solace in the latest glimmers of hope like blind faith, as the plague continues to spread and we place our bets on how far it will go next year.

My child’s children will never see these mountains as tall and green and lush and majestic as I once did.  But no longer do.  Now I see red.  I am red with anger.  The mountain may silently weep.  But I can rage loud as the color red.

OK, friends, readers and passer-bys, on that happy note… I’m off again this week for another round of ditch camp.  See you at the end of the week. 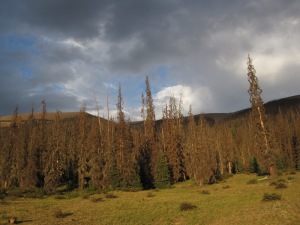 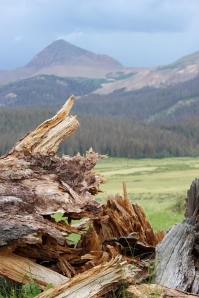 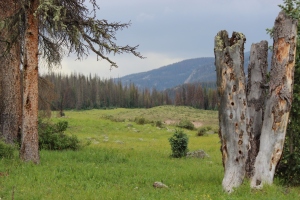 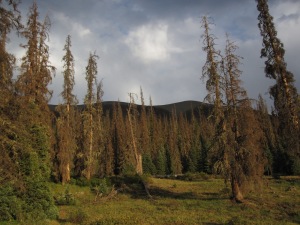 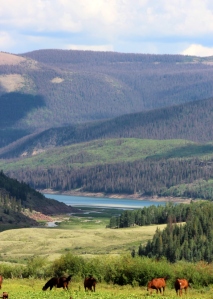 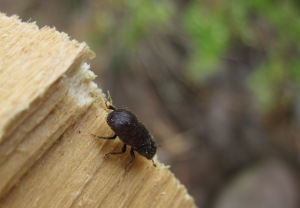 9 thoughts on “Listen to the wilds cry”