This is dedicated to the angry old man who was so afraid of noise all he could hear was his own shouting for silence. And for the folks so busy tooting their own horn they miss the symphony behind them.

I wrote this article a couple months ago for a magazine I thought would be brave enough to publish it. They were not. Am I?  Silly question.

This piece may break some peace, stir some waters, ruffle feathers, raise fur and churn up mud so comfortably settled at the bottom of the still forest pool.  My sincere apologies if I offend any individual and I hope to hear  your response and opinion if so.  You matter to me.  My intention is to share my view, and in doing so, open eyes.  Maybe even open a few hearts, minds and souls along the way, but that is asking a lot of a little article.   It’s long. Take your time. I hope you will enjoy. 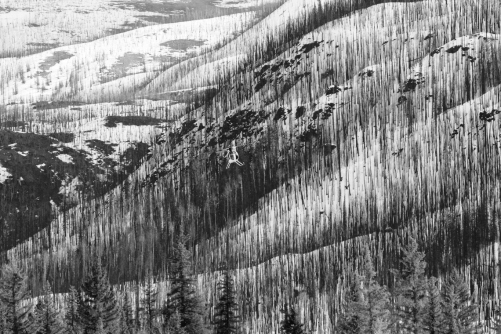 So the other day…

We’re at the Rio Grande Reservoir Dam. The westernmost edge of the nearly 110,000 acre West Fork Complex fire that burned deep into the Weminuche Wilderness last summer. It stopped here in part because of the powerful prompts of the powers that be.  The  District that owns and operates this dam, and depending on how you look at it, owns a lot of the mighty Rio Grande.  When the fires erupted in June, the crews were here working on the hundred year restoration of the dam.  Water is powerful.  Here in Colorado, powerful enough to hasten firefighting efforts, mechanized and otherwise, into the Wilderness and keep the fire from damaging more of the fragile water shed or dam restoration efforts.

In the snow, the charred trees to the south and east look like the pencil hatch marks of a black and white drawing.  The hills are somewhat sensual in their stark exposure, now revealing the undulations, curves and crevasses.  It’s beautiful in a different sort of way.

I forget about the burn some times.  Out of sight, out of mind.  Finally.  The scars on the land will last a lot longer than ones within me.  Left quite an impression on us in early summer as our family remained on the otherwise evacuated mountain while the hills below us burned.  And then later after the rains began we’d stare at the gathering thunderheads and wonder.  I remember friends in San Fran after the big shake up of ‘89 that would wake in a sweat when they felt a rattle for a long time afterwards.

An hour ago, my husband, Bob, rode his snowmobile here to meet his cousin, Ty, who is coming up from the farm on the valley below to play in the mountains for a couple days. He’s also delivering the Cat tracked skid steer.  Bob’s new toy. Yes, you could say, Bob’s Cat.  And our big splurge.  The secret weapon for building our new log cabin.  We’re cutting down all the beetle kill, which I guess means all the trees, on our land along the Rio now while the river is frozen, dragging the timber back across, and stockpiling, all in preparation for building our new little family home this coming summer on the bare bluff above the Rio.

That’s why I’m here now.  I need to ride that snowmobile back with Gunnar on my lap, the almost eighty pounds of semi-feral- almost-four-going-on-like-six-months-old German Shepherd dog, while my husband slowly follows in that Cat.  Otherwise, I’d manage pretty well to stay away from even this white ribbon that hints of leading to civilization.  It’s not that I’m anti-social; it’s just that I like to be alone.

On the way here, Gunnar and I alternate between running and walking along the six and half miles of packed snowmobile track from our home to this spot.   Just past Halfway Hill, there’s a dead moose spread across what would in summer be a road.  The head, spine, and a few legs are still intact.  It’s like a speed bump in the snow.  I can see from the tracks that Bob drove the snowmobile right over it.  I lift it up and drag it to the side of the road.  Gunnar sniffs.  He does not care for rancid meat.  Not much remains.  The spine is already speckled with bird droppings.

Just past the pile of bones, I feel it before I hear it, and hear it before I see it.  I’m like Radar.  By the time the helicopter comes round the mountain, I’m standing there pointing my big old SLR camera with telephoto lens (no, I do not own a smart phone with built in camera, or any phone for that matter, there’s no cell service around these parts anyway; and yes, I do run with this big beast of a camera around my neck). I recognize the yellow. Same one that came up two weeks ago in a storm looking for the Big Horn but I think when he got this far, they were happy to leave.  The pilot flew directly over our house and all he got to see was my horses huddled against the fence and maybe some crazy woman running around in the snow. Wild life indeed.

There’s not a lot of noise around these parts in winter.  You learn to recognize motors. We’re at the kitchen table at breakfast and walk outside if we hear an airplane. Funny thing, funny for lack of a better word, is my horses get buzzed a few times every winter.  They no longer flinch when the copter flies over head.  Let alone run like we watch the moose do from the kitchen window, out there across the deep white pasture trying to seek shelter in the trees.  I don’t know if the needle-less timber provides much shelter anymore.

Now, the pilot sees me and does a quick 90-degree maneuver, high tails it over Finger Mesa and out of site.  I wonder what he thinks when he sees some woman way out here ready for him before he knows I’m there, with a camera pointed at him? Better that than a shot gun.  I’m guessing he’s heard of me.  Not a lot of other half-feral women live out here.

I continue on, Gunnar blazing the way, following Bob’s track to the dam. This is where the plowed dirt road that eventually leads to a plowed paved road that after a while leads to a little town ends.  And this is where the snowmobile track that leads to our cabin and then into the great white yonder up to the Continental Divide that may seem like the end of the world to some and the big back yard to us begins.

There are people around in summer. An abundance of Texas tourists, ATV riders, fishermen fixed up in Cabela’s finest, hunters in camo and blaze orange with big diesel trucks that they drive even to their office in some flat land town but here actually might get dirty and kick into four wheel.  Maybe.

I live for winter.  That’s our time.  Me, my husband, our four legged and feathered friends.  Our son, when he’s not off to university or like this winter, working at the South Pole. (You might say growing up here was in preparation for such a position.)  No one has lived here before us, and probably, no one would live here after we move, if we ever do.  High and harsh as this mountain is, I’m in no rush to leave.  And it’s not summer now. Those tourists are a long ways away right about now.

Only, here they come.  One, two, three, four, five, six… a parade of big diesel trucks moving up the mountain and pulling into the little snow packed parking area at the dam. Safety in numbers. Only that’s not why I live here.  The wildlife would probably say the same if they could speak, or if we would learn to listen.

It’s not tourists.  Not really.  It’s the Colorado Division of Wildlife.  I wonder what they’re here to chase down, shoot, tranquilize or trap today.

The herd of trucks drive up and stop dead in their tracks.  They’ve arrived at what they may think is the end of the world, but for us is just the beginning.  I can be sure my presence is not a welcome sight.  My support, or lack thereof, is not unknown.  It’s kind of fun being a little woman intimidating a bunch of big men.

Turns out to be the moose’s unlucky day.  We cringe to hear this.  Last time they went for the moose, four were killed in one day.  The tranquilizer didn’t work very well.  Oops.

One more cow moose was left for dead a mile below our ranch.  We watched over a span of several days in sub zero weather as she lay there still in the open snow, and then she was gone.  She was one of the lucky ones.

Before that, there was the lynx project which I understand they finally tiptoed away from with their tail between their legs.  It’s 1998. Global Warming is getting hot in the headlines.  But hey, let’s see what happens if we trap some lynx from up in Canada and bring them over 1500 miles down to the Southern San Juans!  There might be a few that remain.  Most starved to death, or high tailed it back north where they belong.  I hear a few got hit crossing a highway on their way. Several years before they scrapped their attempts, I read the program was called a success based on numbers.  That year, they counted more kittens born in the litters than they recorded deaths.  I always wondered: how many dead did they count?

Today, they’re here to collar the moose, they say.

Right.  So, I’m thinking, the plan is this:  they’ll chase down the already taxed moose from the air, sharp shoot and tranquilize it, hope the tranquilizer works this time, strap on a collar, and hope the animal makes it so they can go back to town and watch the wilds from the comfort and convenience of their computer on their desk in their office.

Today, I keep my mouth shut and fire up the snowmobile instead, call the dog who jumps on board and off we go, back up the mountain to the safe haven of our home, wait for my husband to slowly follow in the Cat, and then sit back and watch the helicopter fly back and forth for the rest of the afternoon, right over our house or across our pasture.  I know my horses won’t be any more bothered than me. But I worry about the moose.  I hope they get the tranquilizer right this time.